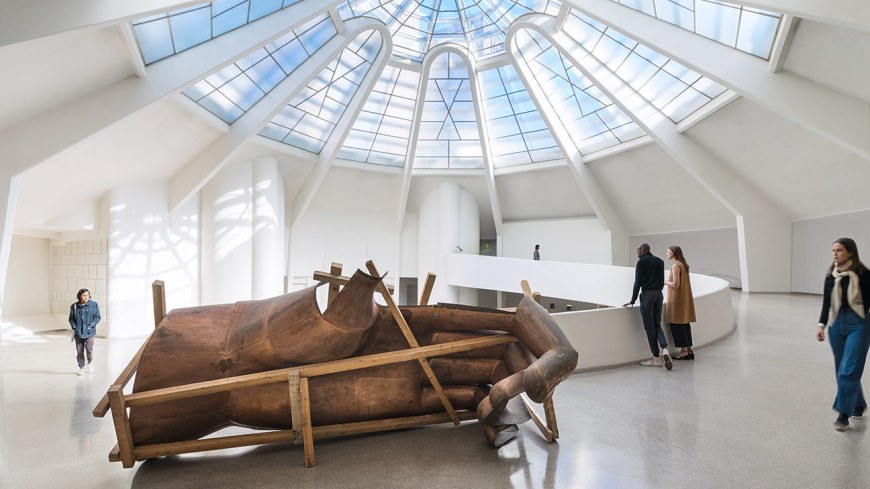 “Take My Breath Away”

Danh Vo at the Guggenheim Museum

A Dane, a gay man, a refugee from the Vietnam War, a child raised in the Catholic faith, an artist who lives in Mexico and Berlin: these are some of the unique qualifiers that can be applied to Danh Vo, whose current exhibition at the Guggenheim Museum is entirely original and beautifully expansive.   I mean “expansive” in a particular sense: Danh Vo has a way of offering a succinct starting point with his work and assigning nuanced speculation and circuitous trails of thought to the viewer.  It is such a lovely and uplifting intellectual exchange.

Installation view “Take My Breath Away” by Danh Vo

The chandelier, depicted above, already loaded with cultural, economic, sentimental and literary meaning, has been installed in a startling fashion.  It barely skims the surface of the glossy Guggenheim ramp. It is described on a nearby label as having a particularly disquieting provenance.  This, and two other chandeliers which Danh Vo was able to purchase and which are also in the Museum in different “states,” hung in the Hotel Majestic in Paris.  The Hotel was the site of the signing of the Paris Peace Accords in 1973, which ostensibly ended the Vietnam conflict but also marked the beginning of a period of violence, betrayal and humiliation on both sides of that war.

What appears to be an abstract sculpture, above, is defined by the artist as leather upholstery from two chairs.  The chairs were purchased at Sotheby’s at an auction of items belonging to Robert McNamara.  McNamara was the defense secretary for both Kennedy and Johnson during the period of Vietnam War escalation.  They were given to McNamara by Jacqueline Kennedy after President Kennedy’s death.

Danh Vo deconstructed the chairs.  Parts of them are scattered around the exhibition.  The frames here.  The springs and stuffing there.  To me the dismemberment of these potent objects manifests as rage.  But then (…) I was 21 in 1973 and I remember the end of the war.  What do these objects and the wordy labels mean to someone in their 20s now?

I really like the way Danh Vo allows meaning to change, to evolve and to flicker in and out of objects.

There are other objects in the show that a similar proximity to notorious events: Ted Kaczynski’s manual typewriter for example. (Which somehow I did not see.  Only read about!  But even in pictures, it seems to hold barely restrained malevolence within its banality.  But of course that is my projection.  Not long ago I watched Manhunt: Unabomber on Netflix.  All eight episodes!) 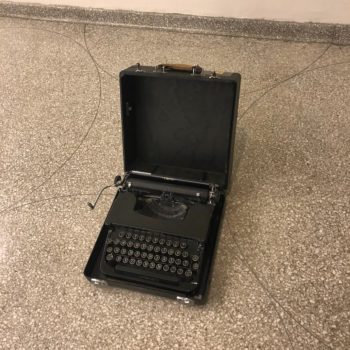 It should be pointed out that although many of the objects in the show are accompanied by rather lengthy texts the work does not rely on labels.  I concluded this because of the following: I was in NY for just a few days.  I went all the way up to 90th Street and Park to see this show on Thursday.  The Guggenheim is closed on Thursday.  Pressed for time and overly committed I went back on Friday.  At one point wandering up the ramp I got irritated waiting, in back of an overly witty couple, to read the descriptive cards.  I struck off, ignored the texts and was swept up in the pure visual power of the show.

The piece by Danh Vo entitled “We The People” is an extreme undertaking.  I didn’t quite understand that I was looking at a dismembered replica of the Statue of Liberty, constructed of copper at full scale, until I was on the subway going back downtown reading the exhibition notes.  This extraordinary artwork will never be exhibited in one place as it is gradually being dispersed to various cultural institutions around the world.

We The People by Danh Vo

To see Danh Vo talk (in Danish with subtitles) about the creation of We The People, click here:

The inclusion of Catholic imagery, especially the medieval sculpture, adds gravitas and grace to the exhibition.

The piece above is an example of the artist’s joining of objects from different era: damaged medieval wooden sculpture is fused to fragments of Roman marble statuary.  Elsewhere naturalistic tangles of branches have grafted to them tiny, finely wrought medieval countenances.

The artwork above is made of velvet fabric which was used as backing for an exhibition of objects in the Vatican Museum.  (Just thinking about how Danh Vo came to get his hands on this particular velvet has so much narrative potential.)

One of my favourite pieces in this show are the letters from Henry Kissinger to New York Post theater critic Leonard Lyons:

In another letter, dated May 20, 1970, Kissinger writes the following:

“Dear Leonard, I would choose your ballet over contemplation of Cambodia any day — if only I were given the choice.  Keep tempting me; one day perhaps I will succumb.”

At the time, Kissinger was helping to orchestrate the so-called Cambodian Incursion.