Here in Toronto’s A Space, in an exhibition titled A Non-Space at A Space, by the Art Collective Postcommodity, video documentation of the slaughter of a single sheep is on display.  Relative to a Hermann Nitsch bacchanalia, and its bloody methaphoric stew including the Catholic Church as well as Broadway, this is a simple act.  The sheep is butchered in the bathtub of the Gallup Motel by an attractive woman identified only as a former Miss Navajo beauty contestant.  We see Miss Navajo lead the docile animal from the sunny, southwestern exterior to the motel’s bathtub.  The animal’s throat is slit.  It quickly dies.  The carcass is expertly skinned and the body is rendered into meat. 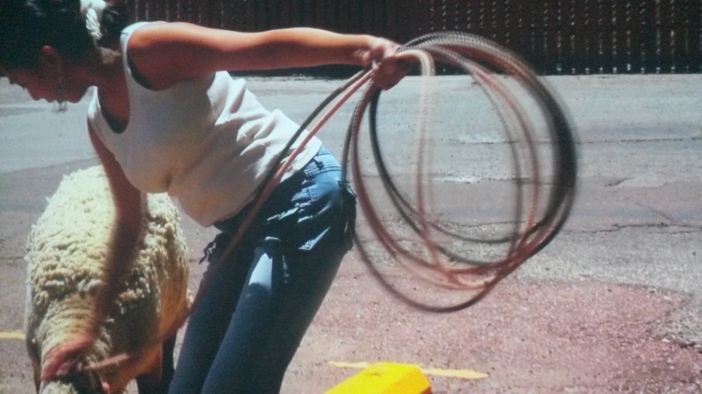 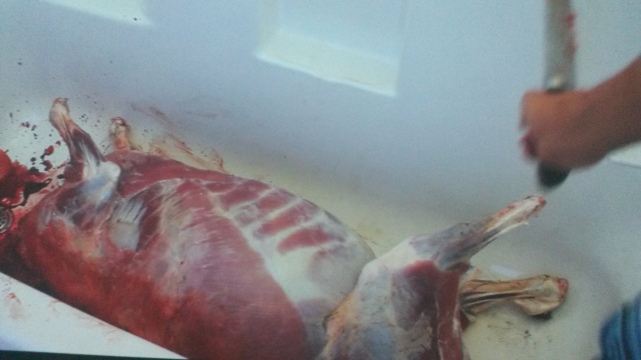 Butchering of livestock is routine and takes place around the world in factories, farms and probably bathtubs. Ms. Navajo’s ancestors in Gallup, would have been slaughtering animals for many thousands of years in this region.  But not sheep.  Sheep are European imports.  Sheep arrived in North America around 1600. (I wrongly identified the animal as a goat in my original post.)  It would have been an entirely different kind of video – more action and adventure – if, for example, an antelope (actually a Pronghorn), indigenous to North America, were brought back to the Gallup Motel.

The event in the motel room was recorded at various angles by at least four cameras.  The images are projected big and on every wall of the rather small space.  It’s oppressive, even alarming.  The viewer is hemmed in by the flashing knife, the gore, the tugging and snapping of bones, tendons, vertebrae as the blood circles the tub’s drain.  It struck me that this profound act, performed in a spirit of cultural empowerment, within the down market motel room, is enough.  The fast edits and multiple supersized screens are superfluous.

In the room next door the Postcommodity Art Collective presents a two channel surveillance video of residences of the affluent middle class in the Santa Fe area called My Second Home, But I Have a Very Spiritual Connection With This Place.  (I love surveillance video and the quiet dark room was a relief after all the slaughter in the bathtub.)  I guess the point is the houses have that adobe look in historical accord with the surroundings.  I have never been to Santa Fe but oddly enough you can see the adobe look in some of the suburbs of Winnipeg, which takes appropriation to a whole other level.

In the writing that accompanies the exhibition the terms “settlers” and “colonizers” are used.  The show’s curator, Ellyn Walker, in a short bio, is compelled to identify herself as a “settler” of Scottish and Italian descent.  What does this racial identification by the curator mean?  Is this the politically correct end game in which ancestry must be declared and then judgement is passed?  I find this a depressing trend.