Yesterday was the last chance to see the Isabel Rocamora show – titled Troubled Histories, Ecstatic Solitudes – at the Koffler Gallery.  The exhibit, dominated by three large-scale video projections, opened way back on September 17, and it is utterly prescient in terms of its grave, unflinching tone and the subject matter it contains. 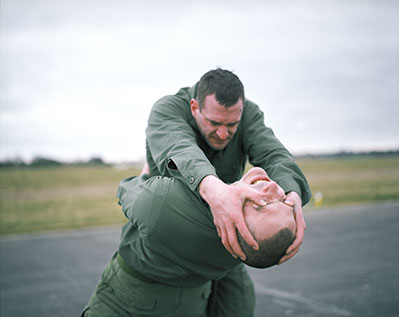 Still from Body of War by Isabel Rocamora

In Body of War Isabel Rocamora probes the phenomenon of close-up brutality.  In an extended sequence the camera warily circles a fight to the death between two anonymous soldiers.  Staged on a barren runway beneath grey skies, this grim, slow battle confusingly becomes a kind of homoerotic dance from which there is no escape.  A soundtrack of medieval-like, choral chanting heightens the sense of ritual and archetype in this piece. Eventually a victor is left standing, panting and jubilant, and the camera turns away to slowly penetrate the opening of a nearby bunker.  The desultory movement toward darkness creates a truly horrifying moment.

Stills from Horizon of Exile by Isabel Rocamora

In Horizon of Exile, a two channel video piece, snippets of monologue hint at the reasons a women must leave her home and set off into a barren, windswept desert.  Against an elegiac score and relentless wind, two women then perform a mesmerizing rolling dance, where they are carried like flotsam across a glittering salt flat in a God forsaken plain somewhere.

Stills from Faith by Isabel Rocamora

An Orthodox Jew, a Greek Orthodox Christian and a Sunni Muslim are all engaged in prayer in Isabella Rocamora’s three channel loop called Faith.  Filmed in a craggy desert that reads “holy land” they are united in ancient transcendent practices.  The religious trappings – the robes, the gestures, the pious heavenward gazes, the fervent ritualized murmuring – are remarkably alike.  In fact not much is separating these men of God from one another, and yet, Isabel Rocamora seems to be saying, the superficial similarities are meaningless.  Tradition is terminally unique.

I really liked seeing this show: The stark graphic power, the rich soundscapes, the choreography of the camera and the subjects, and the potent imagery.  Ultimately the work struck me as very dark: The subjects are all unable to break out of age old oppression, each is condemned to endlessly repeat the rituals of the past and passively accept their fate.

Fortunately, it is possible to go shopping for handmade items on the third floor of Artspace Youngplace otherwise I would not have trekked upstairs and come across the tiny gallery called Typology.

Installation shot of Moving Right Along by Nicolas Fleming

An installation by Nicholas Fleming called Moving Right Along is about to close.  I’m glad I caught this show.

Nicholas Fleming must be a very energetic guy.  He has built an entire room within the gallery, except that it is all delightfully backwards so that drywall, spackling paste, chipboard and insulation foam are on display and the smooth, white gallery walls with crisp corners and subtle lighting are hidden.  It’s kind of like putting a dress on inside out.

An unmistakable Home Depot fragrance wafts into the hallway from Typology.

I really liked looking at the “fountain” in the center of the space.  It has ghastly, poisonous look to it.  Something toxic appears to be weeping from the hardened foam to create a pool, coated in noxious sheen, at its base.

Installation shots of Moving Right Along by Nicolas Fleming

No doubt Nicholas Fleming allies himself with Minimalism, Arte Povera and various Conceptual Art branches emerging in the 1970s but what is so interesting about this show to me is the exotic beauty created by these humble materials which leads to the whole idea of the infrastructure of our society and how it is hidden and denied and avoided, with perilous consequences.