There are CONTACT exhibitions everywhere in Toronto this month; a coffee shop around the corner from me on Dundas West, the local organic supermarket even!  Hard to get a good look at them through the vegetable misters, but they are there.

Is the essential character of a city reflected in its transportation systems or do the systems help to create the character?  Think of the glamour of Montreal’s metro; its bold graphic styling and silently approaching trains, or the romance of New York’s subway, permanently embedded like its famous black and white, art deco tiles.  Relatively, Toronto’s underground transportation has seemed somewhat mundane, workaday and all about function.

Chris Shepherd gets at the heart of the form and function connection in his exhibition at Bau Xi Photo.  (I am actually the owner of some subway shots Chris Shepherd and I think it is because of looking at these photographs that I began to appreciate the aesthetic of Toronto’s subway.)  Sadly, it is not glamour or romance that is at the core of Toronto; it is work.  And the Toronto subway is in total harmony.  The photographs of Chris Shepherd show us the modest pathways to our daily grind and reveal their perfection.

From BlogTO I learned the following:

The colours were chosen to discourage rowdy behaviour and loitering rather than for aesthetic reasons.  Consequently, they have that institutional quality of hospital or penitentiary walls.  For many years, Torontonians grumbled that their subway stations looked like public washrooms.  But now, decades later, the remaining designs have become Modernist classics.

There has been a recent flurry of TTC projects to improve and concurrently embellish the existing underground system.  It’s exciting to see a little civic preening going on in this city so focused on dogged achievement.

At Dufferin Station, Winnipeg artists Eduardo Aquino and Karen Shaski (of spmb) add blooms of pure colour, and big pixilated images to transform one of the most heavily used and rundown station of the Bloor line.  Chris Shepherd documents this unrestrained use of colour so well.  We can only hope it does not lead to loitering or rowdiness.

And finally the hoardings have come down at Union Station.  Big, messy,  sketchbook style line drawings by Stuart Reid are revealed.  The drawings, depicting TTC riders, have been blown up and transposed onto glass panels.  They are fresh, unexpected, thoughtful, sensitive and kind of a shock relative to the relentless TTC grids and tiles.

My current work address is near the Ferry terminal at the bottom of Bay Street.  Wandering around the area at lunch time gives me the feeling the plastic wrap is coming off.  Everything is shiny, clean and has that new car smell.

Across the street from me, draping the exterior of the Westin Harbour Castle Conference Center at 11 Bay Street is a public installation (also part of the Scotiabank CONTACT Photography Festival) titled Best Beach by Sarah Anne Johnson.  The piece is particularly stunning when seen from within the Waterpark food court at mid-day.  At that time the whole place is flooded with light and Sarah Anne Johnson’s piece looms over the oblivious diners, glowing and shimmering in the daylight. 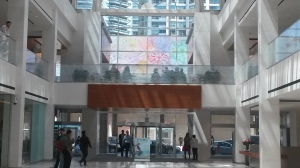 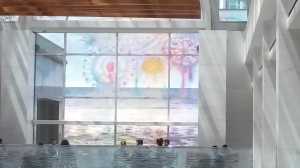 It is a huge photograph and it sweeps across the entire end of the food court’s massive plane of windows like some giant playground graffiti, messy, dripping, flourescent and joyful.

The exhibition at MOCCA, called Part Picture, is also associated with the Scotiabank CONTACT event.  On entering the show there is a statement clarifying the curatorial rationale for the pieces included.  The artists in this exhibition, declares the statement, must be:

Why Jan Groover is included I do not know?  She was born in 1943 and became well known in the 1970s for close up, vaguely feminist, domestic interiors.  Maybe its because they are truly painterly and reminiscent of a Braque still life in purples, greens and reds?  In any case I appreciated seeing these beautiful photos. 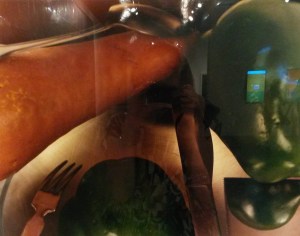 Painterly too are the photos by James Welling.  It’s interesting that James Welling has worked for Brioni (the Italian fashion conglomerate) because these prints resemble nothing so much as pretty dress fabric.

Works by Ryan Foerster are more in line with the stated intentions of the show and truly take photography into another realm.  Eschewing the tradition of pristine craftsmanship in a dust free darkroom, Ryan Foerester uses mangled photo plates, chance and accidents of light, dirt and debris to create wonderfully expressionist pieces with a particular Petri-dish gore appeal that reads as post apocalyptic.

Ellen Carey’s Mourning Wall is composed of spent Polaroid plates.  They have a dreary, grey, funerary look and are arranged in the finest tradition of minimalist sculpture.  This piece made me think about the brief flowering of unique technologies.  (How exciting Polaroid once was!  Why did I throw my Commodore 64 in the trash?!)  Ellen Carey extends the metaphor of obsolescence, death and decay with the Rust Belt aesthetic of this work.

Slick reams of photo paper tumble in heaps; snapshots sprout cables or have little blanket covers attached; but more typically, in this show, photographs take on a more painterly look, moving away from documentation, the traditional province of photography, and closer to objecthood, and marketability. 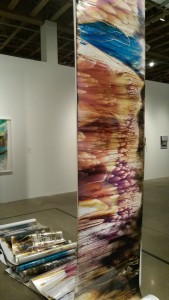 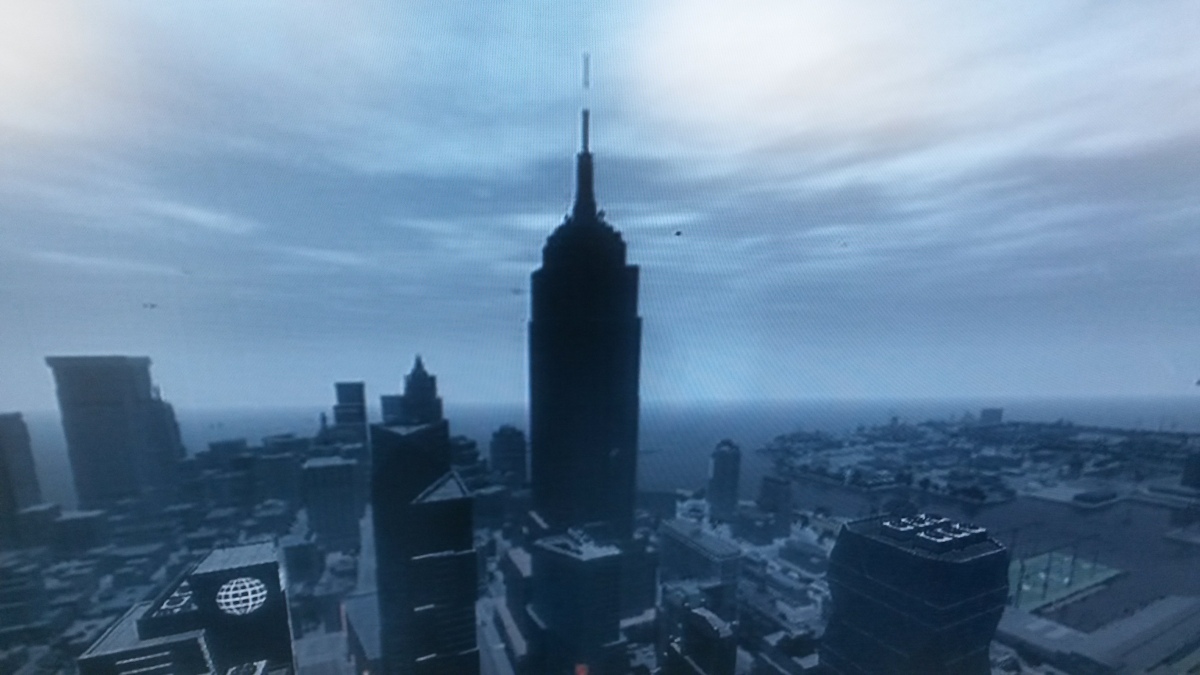 May is like a door opening to the pleasures of summer.  May!  April is so last month.

Photographic images are so utterly ubiquitous in art — and everywhere — and so wildly diverse in their intent and content that I just don’t think of photography as a singular medium with a singular historical trajectory.  However, since the Scotiabank CONTACT Photography Festival, on from May 1 to 31, declares itself a “celebration of photography” I am playing along and thinking photography first, art second.

At the Ryerson Image Center I was transfixed before Phil Solomon’s eight channel piece called Empire X 8.  All eight screens of the Salah J. Bashir New Media Wall display the same direct view of the Empire State Building, but the time of day is different, and evolving, on each.  The continually changing environments — inky night where the building glitters like a jewel in the black sky, desperate grey dawn where scraps of garbage flutter on updrafts around the famous icon, rippling sunsets of orange and pink backlighting the building — play off one another, within the sleek matte grid of images.

The static shots are from uptown, facing toward lower Manhattan, but the peripheral landmarks seem wrong.  The World Trade Center is gone and there is no sign of the Freedom Tower — so we have a time frame — but gone too is the World Financial Center, and hmmm, instead of the Hudson River banked by the shores of New Jersey, there appears to be a hulking military bargelike installation floating near the west side of the island.  Small planes and choppers roam the sky.  The soundtrack is weather only: wind, rain, rumbling thunder. 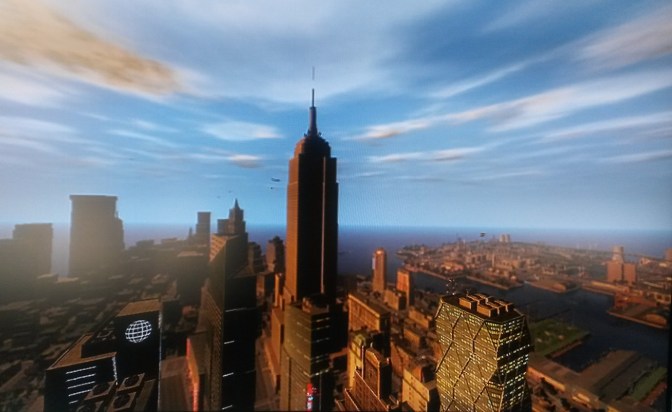 Still of single channel of Empire x 8 by Phil Solomon

For anyone who has been even mildly hooked on Grand Theft Auto this is familiar terrain; it’s a real (unreal) image, manufactured in some digital sweatshop somewhere, from one of the Liberty City Series.  The images are so smooth, dense and controlled, endlessly fascinating to view, and like Andy Warhol’s famous 8 hour Empire movie of 1964, are a blank slate upon which so much meaning can be heaped. 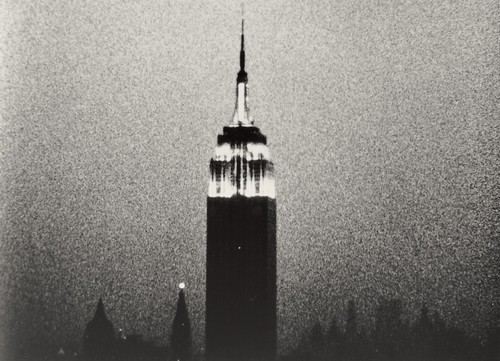 Coming a little closer and the formal and compositional elements are seen to be bold and radical, particularly the use of deep black swaths of shadow enveloping the foreground, dramatic arcs, gaps and crosses. 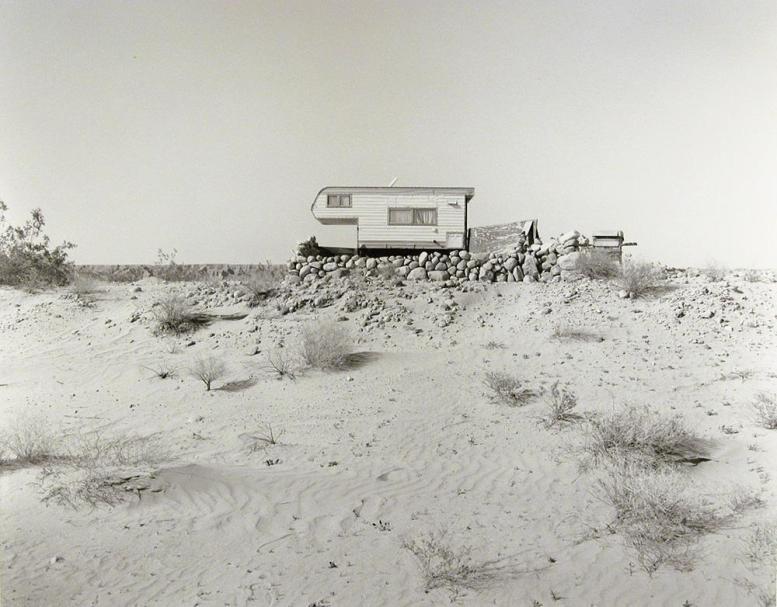 Central Pacific #18 from the Series “Westward the Course of Empire”

The stylized titled printed in pencil are sometimes hilarious.  Could there really be a churned up expanse of desert known as ” The Devil’s Golf Course?”

In other works Mark Rowedel gives a nod to Robert Smithson and Ed Ruscha adding another layer of interest to these intense photographs.  They are in dialogue with important art of the recent past. 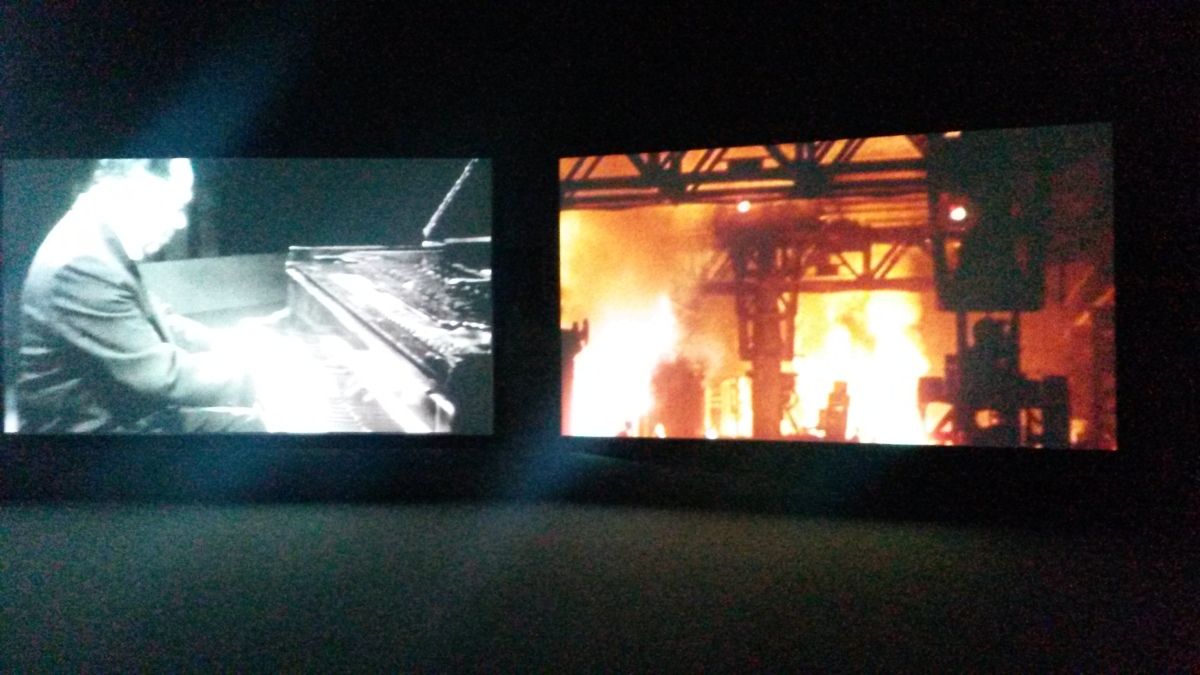 The Unfinished Conversation, the three channel video installation by John Akomfrah, is so dense with ideas and images that I was obliged to make a return trip to The Power Plant and watch it multiple times.  Projected in a hushed room, on massive screens, and featuring a sound track that is at least as rich and layered as the visual component, I found every viewing of this artwork a rewarding experience.

Installation view of The Unfinished Conversation by John Akomfrah

The cultural theorist Stuart Hall is the ostensible subject of the piece and his personal and professional life is effectively traced within it.  Visually and structurally, Stuart Hall functions as a fulcrum – around which a kaleidoscope of images swirl – illuminating societal and cultural forces at work, first in his home country of Jamaica, and then in Britain in the 50s, 60s and 70s.  John Akomfrah seemed to have access to the BBC archives as these distant eras are brought to life with so much fascinating material, including TV programming from the time, news footage, photographs and sound recordings.

Installation view of The Unfinished Conversation by John Akomfrah

Stuart Hall came to the UK as a Rhodes Scholar in 1951.  He produced important academic writings, particularly theories of mass communications and he expanded the idea of cultural studies in the academic world.  But he hardly confined his activities to academia.  He was also a prolific journalist, television personality, champion of the arts, and is often referred to as the “Godfather of Multi-Culturalism” for his work in these various media on immigration, race and the politics of power.  Stuart Hall died in 2014.

Stills from The Unfinished Conversation by John Akomfrah

“Identity is an ever unfinished, endless conversation” is a (paraphrased) statement made by Stuart Hall in the video.  His own identity was shaped in the intensely race conscious Jamaica in which he felt an outsider even in his own family.  He longed to be part of the modern world and for West Indians of that era the UK was an escape and a second “home,” to which, he decided soon after his arrival there, he would never belong.

The sixties in the UK were not just about mini skirts, the Beatles and Mandy Rice Davies!

With a focus on the impact of British colonialism around the world a steady drumbeat of upheaval is referenced in the artwork: Conflicts like the Soviet Invasion of Hungary and the Suez Crisis; social movements like the protests by the Campaign for Nuclear Disarmament, natural disasters of every kind, the 1963 Profumo scandal, workers strikes, the beginning of the wars in Asia, mass immigrations, the travails of the poor in Northern England, Civil Rights demonstrations, the rise of consumerism are all depicted in this piece.  These events affected and changed the individual known as Stuart Hall, along with millions of other individuals.

Installation shot of The Unfinished Conversation by John Akomfrah

Readings from William Blake, Charles Dickens, Virginia Woolf, Mervyn Peake and others, lectures and personal reminiscences by Stuart Hall, and music, particularly jazz of the era, along with sounds of all kinds are woven together to add much of the emotional resonance of the artwork.  The audio reaches a kind of crescendo at the point where Mahalia Jackson sings an extraordinary version of Silent Night, tears streaming down her face, within a melange of images including an actual birth. 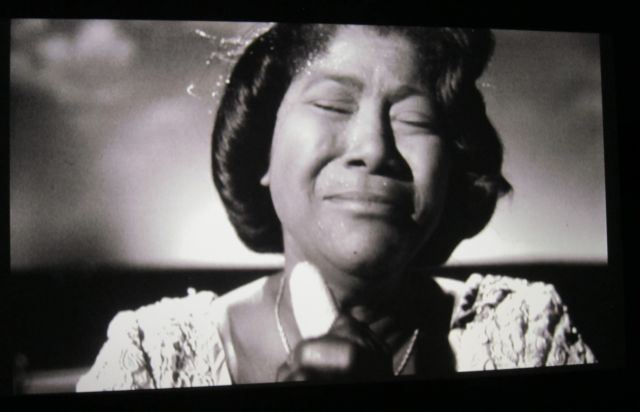 Mahalia Jackson in still from The Unfinished Conversation by John Akomfrah

Below is an (incomplete) list of countries and the dates they achieved independence from the United Kingdom.